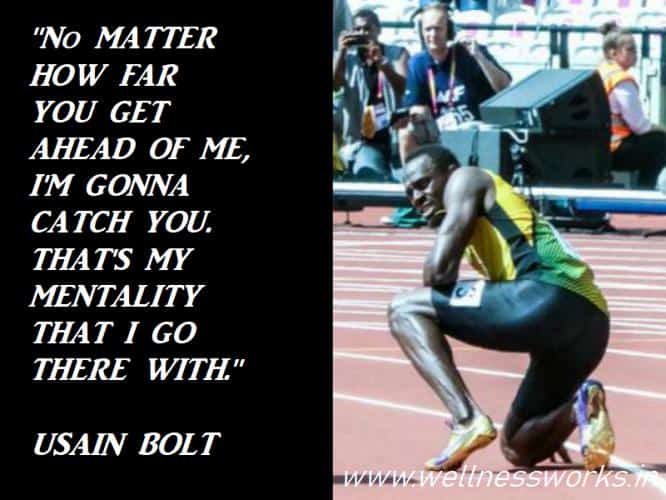 Usain Bolt (full name: Usain St Leo Bolt) a retired Jamaican sprinter is a world renowned sports person. He is famous for holding a world record in 100 metres, 200 metres and 4 x 100 metres relay race. Bolt won the Olympic Gold medal eight times. No wonder he is known to be the greatest sprinter of all times. Moreover, he is the only sprinter to win Olymoic 100 m and 200 m titles at three consecutive Olympics (2008, 2012, and 2016).

Usain Bolt is the most successful athlete (sport man) of World Chanpionships.He is also called “Lightning Bolt” due to his achievements as a sprinter.

With a list of Medals and success under his belt – he is idolized as a sport person and his quotes are mantras followed by millions of fans around the world.

1.”No matter how far you get ahead of me, I’m gonna catch you. That’s my mentality that I go there with.” – Usain Bolt

2.”There are better starters than me but I’m a strong finisher.” – Usain Bolt

3.”Easy is not a option..No days off..Never Quit..Be Fearless.. Talent you have Naturally.. Skill is only developed by hours and hours of work.” – Usain Bolt

4.”Kill them with success and bury them with a smile.” – Usain Bolt

5.”Worrying gets you nowhere. If you turn up worrying about how you’re going to perform, you’ve already lost. Train hard, turn up, run your best and the rest will take care of itself.” – Usain Bolt

6.”I know what I can do so it doesn’t bother me what other people think or their opinion on the situation.”

9. “You have to set yourself goals so you can push yourself harder. Desire is the key to success.”

10. “Learning the mind is as important as understanding the body.”

Ways to Cure a Common Cold

If you accept this notice, your choice will be saved and the page will refresh.