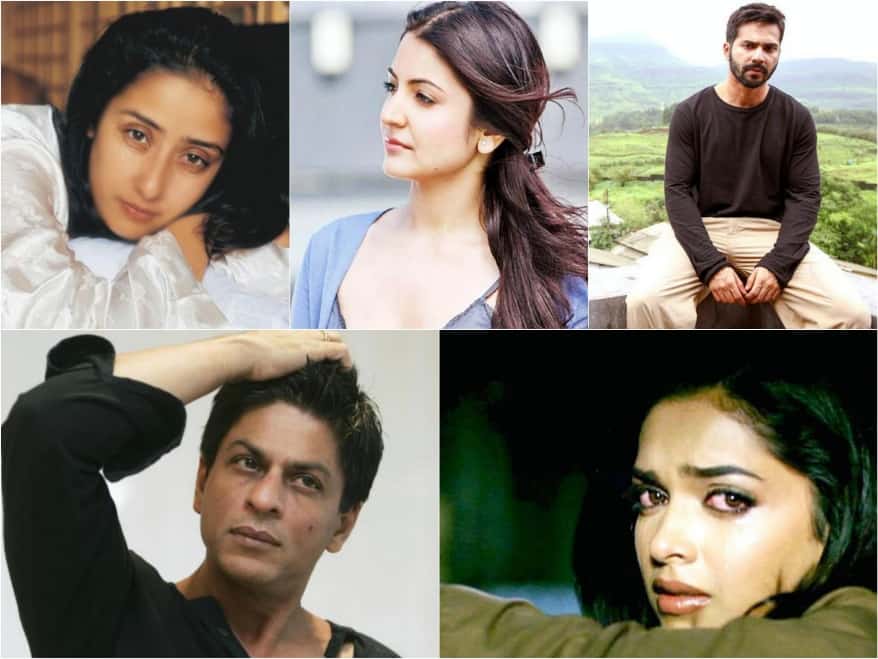 From Shahrukh Khan to Deepika Padukone to Priyanka Chopra and Kangana Ranaut over the last 4-5 years, many a star has come out and spoken about their fight against depression. This as India moves beyond looking at mental illness as a weakness. Life of the stars in the film industry is under the harsh arc lights all the time, for them, it becomes difficult to strike a balance, many a time the stress gets to them. Today Bollywood stars  fight depression like never before

Nature of work of Celebrities causes Depression or Anxiety

Sometimes it’s the nature of the work they do other times it’s the shallowness of the life they lead Method leads to madness Take for instance actor Randeep Hooda who spoke about being depressed after acting in films Highway and Sarbjit. He said, “There was a big hangover after ‘Sarbjit’ because of the involvement that was required in the film. It all lingers on. It has happened before as well. After ‘Highway’, I was depressed for a long time. I had to tell myself that I am not a petty taxi driver and that is not my life.

As a star, you have to go through such things at times. You are as good as your last act In Bollywood or let’s just say in the films you are as good as your last movie, the industry is unforgiving. If your last couple of movies are a flop it could well spell the end of a career, as offers slowly dry up and well-meaning friends begin to avoid you. With it also comes a set of financial difficulties because the star life does not come cheap. Depression slowly wriggles its way in.

Manisha Koirala candidly admits, “slowly, shadows of my past friendships became a distant dream… did I have a bunch of friends with whom there were promises of lifetime? Depressed yes I was and that led to other ailments as well for me, but that is in the past now.”

Ways to Attract Good Energies in your Daily  Life

Trolled by Social Media – because of Depression

As we roll on full speed ahead on the information superhighway, Bollywood constantly falls prey to the army of trolls on social media. They are judged not only for what they say online but what they wear and who they are seen with. Sometimes this criticism on social media even turns abusive and violent. As natural progression belief goes down for the star and anxiety increases.

Anushka Sharma speaks on her Depression:

Anushka Sharma a victim of depression is of the view that depression is like a stomach ache, she says, “I have anxiety. And I’m treating my anxiety. I’m on medication for my anxiety. Why am I saying this? Because it’s a completely normal thing. It’s a biological problem. In my family, there have been cases of depression. More and more people should talk openly about it. There is nothing shameful about it or something to hide. If you had constant stomach pain, wouldn’t you go to the doctor? It’s that simple.”

“I want to make this my mission, to take any shame out of this, to educate people about this.” Acceptance and awareness that this is a disease is important to the treatment of the ailment.

Step One: Know the Signs and Symptoms of depression

The first step in beating depression is to recognize the symptoms. You may have one or more sign that spell depression and they are important to recognize it. Persistent sadness, Changes in sleep, appetite, and energy, lack of interest and difficulty concentrating are among the top signs.

How to Speak the Truth with Mindfulness

Deepika Padukone speaks on her Depression:

Deepika Padukone was a classic case of the ailment, “I thought it was stress, so I tried to distract myself by focusing on work, and surrounding myself with people, which helped for a while. But the nagging feeling didn’t go away. My breath was shallow, I suffered from a lack of concentration and I broke down often. Then, once, while talking to my mother, I broke down. She realized the problem, and got in touch with a psychologist friend, to get to the root of the cause.”

The fact is that everyone is not as lucky to have an understanding parent who is aware and sensitive to this problem that has little or no physical manifestation. To make it worse folks sometimes ridicule you Deepika Padukone making a point here says, “People ask me how you can be depressed? You have everything going for you. You are the supposed number one heroine and have a plush home, car, movies… What else do you want? Therein lies the problem.”

People talk about physical fitness, but mental health is equally important. I see people suffering, and their families feel a sense of shame about it, which doesn’t help. One needs support and understanding.

If you feel that you are depressed the next thing you should do is to seek the assessment from a mental health professional on the ailment. Be open about describing your symptoms and leave it to them to decide.

Varun Dhawan on his Depression

Varun Dhawan of Badrinath Ki Dulhania too went to depression and he says proper medication put him back on track, “I was depressed. I was not clinically declared depressed but I was heading there. This made me very sad to a certain degree. I don’t want to use the term ‘depression’ loosely because it’s a serious illness.

It definitely affected my mental health. I saw a doctor and was prescribed medication as well. It is important for us to treat depression like any other physical illness.” As the pace of life gets hectic stress will hit and cause us to be depressed at times everyone small high and mighty suffers from it, the idea is to recognize it as an ailment, get it treated medically and you will bounce back to happiness fast enough.

After knowing that stars as talented and successful as the ones mentioned above – I am sure you agree that it’s not easy yet it’s not impossible to understand – How Bollywood stars fight depression! Do share the article with anyone who might help and get inspired to get themselves treated for depression.

How to Adopt an Attitude of Gratitude to change your life

How to Practice Mindfulness