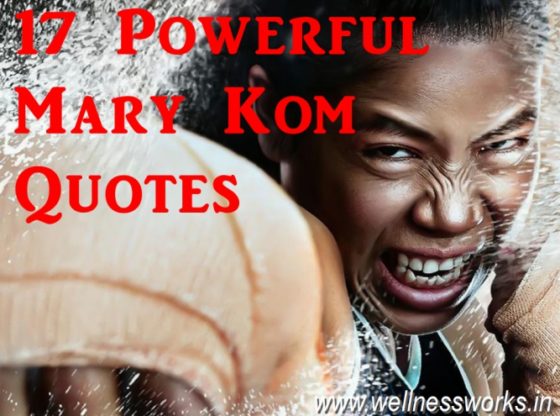 I have selected the most Powerful and Famous Mary Kom Quotes for you to inspire and share with people in your life who you think need motivation:

1. “I do not rely on my technique or strength but also on my mind.” – Mary Kom 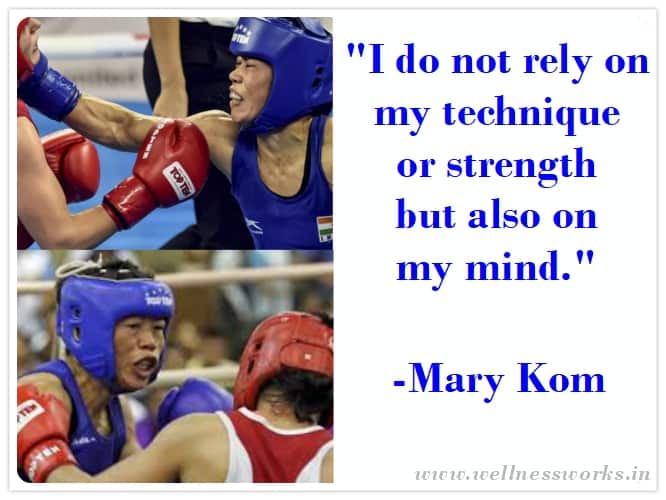 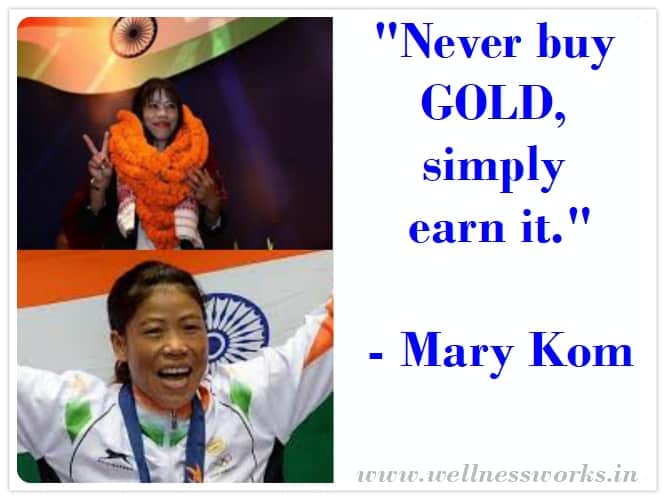 3. “The world today is full of distractions in almost every form and if you fail to notice and overcome them, you will end up nowhere or somewhere less preferred.” – Mary Kom 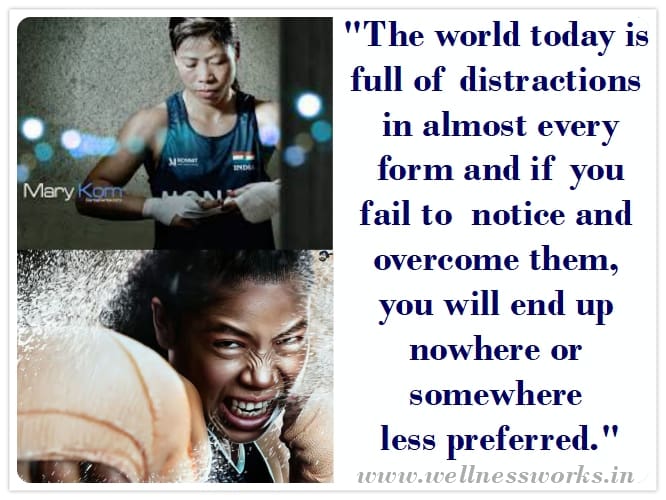 3. “People used to say that boxing is for men and not for women and I thought I will show them someday. I promised myself and I proved myself.” – Mary Kom 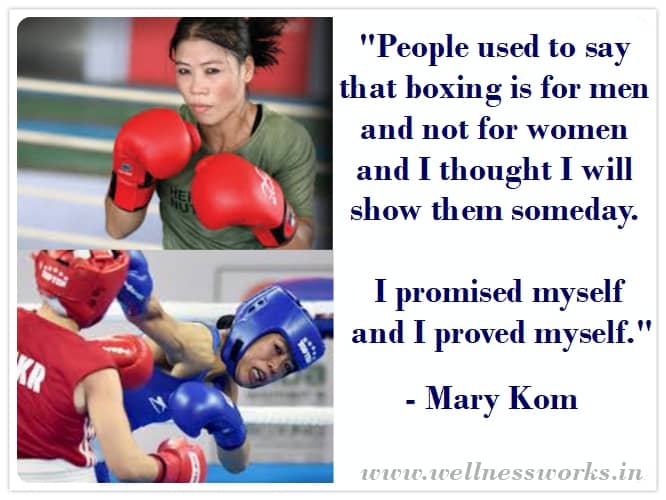 4. “A country like India has a lot of potential. I end with the hope that we will build on that. My life is my message: nothing is impossible.” – Mary Kom 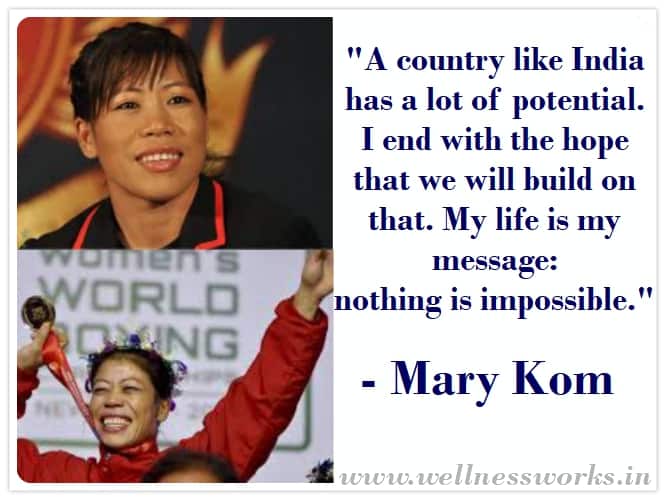 5. “In a sportsperson’s life, the pressure is always there; you have to learn to deal with it.” – Mary Kom 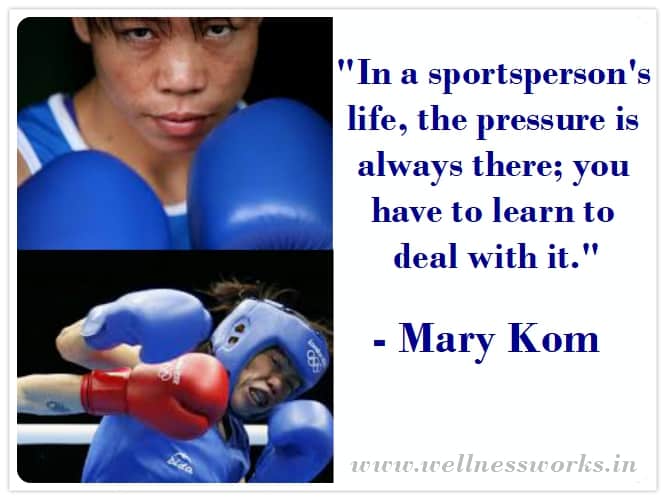 6. “Whether or not I look ‘Indian’ I am Indian and I represent India, with pride and all my heart.” – Mary Kom 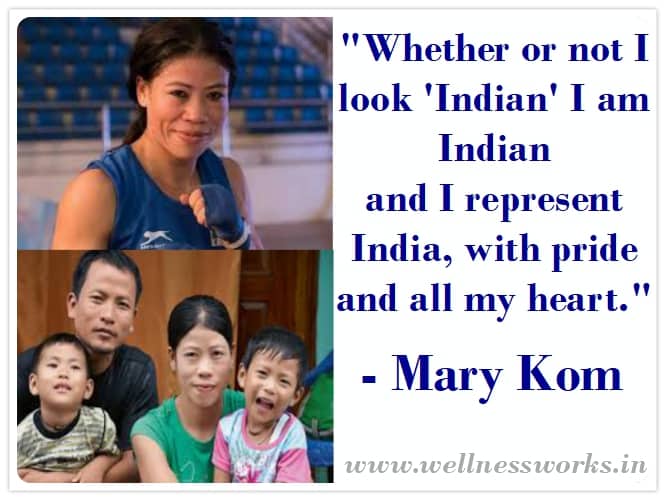 7. “I had no support, no opportunity, no sponsor backing me for most of my career.” – Mary Kom 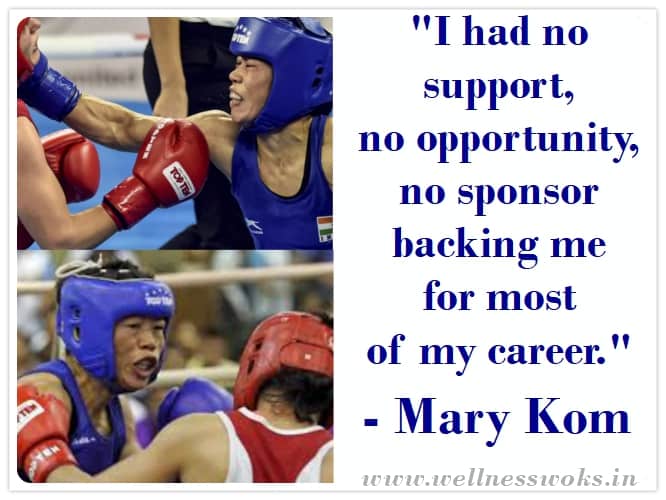 8. “Don’t let anyone tell you you are weak because you are a woman.” – Mary Kom 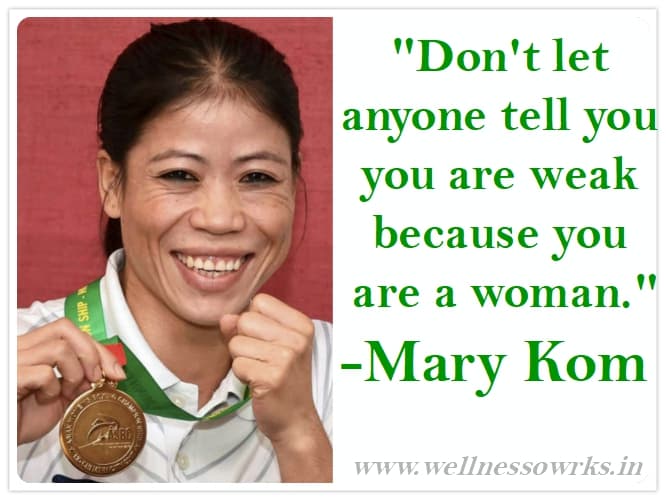 9. “I realise the hardships I faced in my formative years are the foundation of my strength.” – Mary Kom 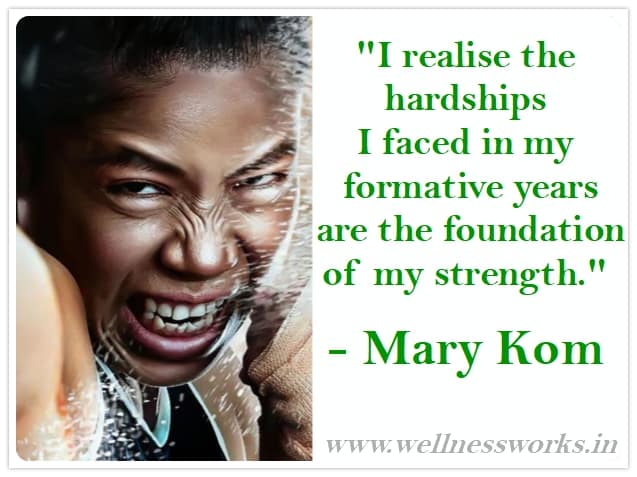 10. “It has been a tough journey. I carried on with the support of family and friends. Despite the loss today, I am satisfied with the way I performed.” – Mary Kom 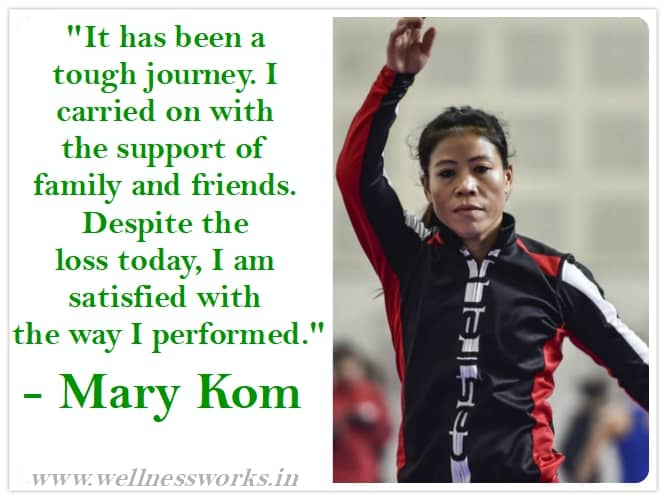 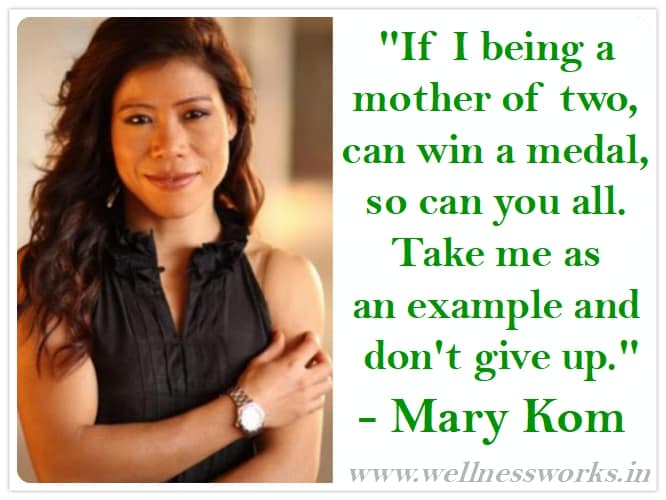 12. “Everyone is scared and asking me questions if I am going to quit. I want to tell them that don’t worry, I am not retiring and will continue.” – Mary Kom 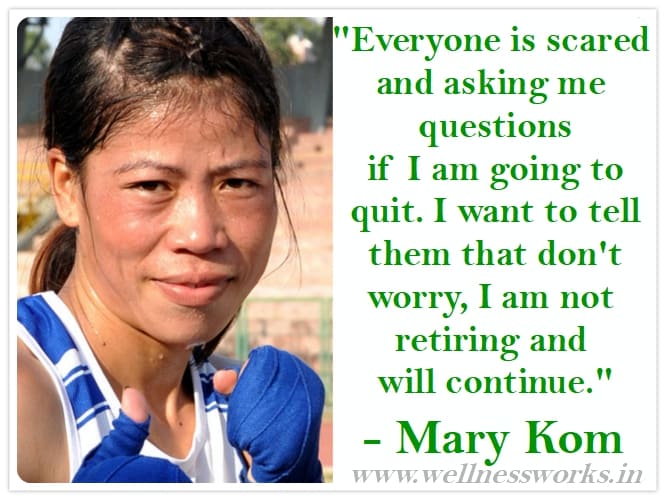 13. “In spite of our penury and deprivation, we did not ever lose faith in God. If anything, God was the force that kept us going, fighting and hoping for better times.” – Mary Kom 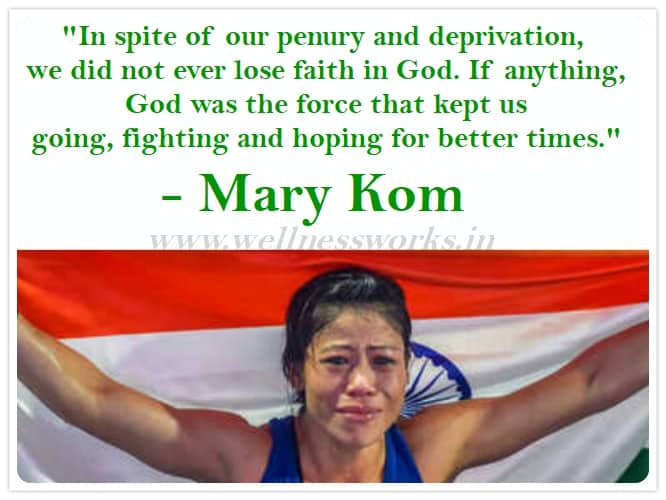 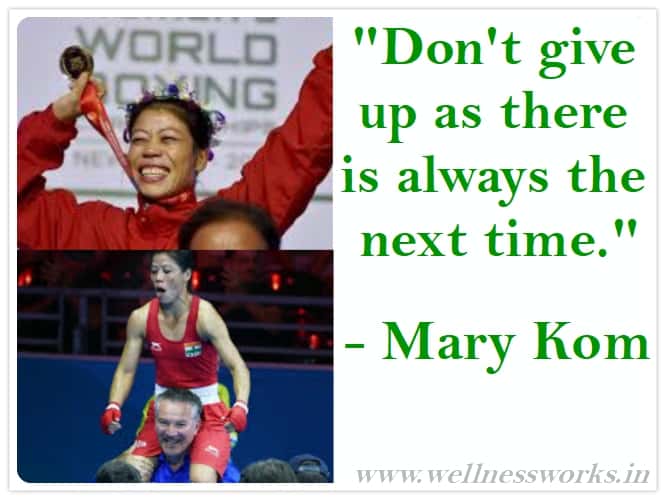 15. “Hard times have abandoned you, good times lie in wait for you.” – Mary Kom 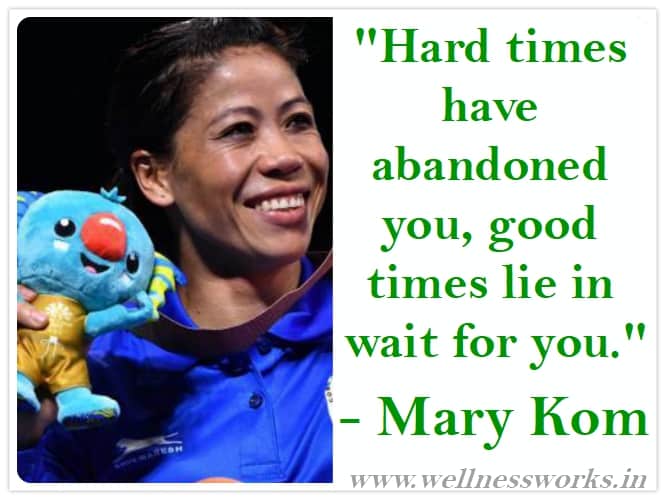 16. “I expect racial discrimination to reduce as our people win medals for the country.” – Mary Kom 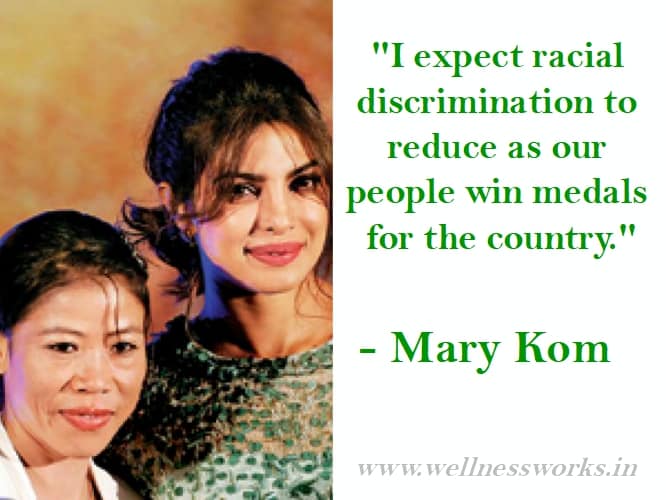 17. “With a bandage over my eye, I happily set off to play marbles with my friends – it was perfect for taking aim.” – Mary Kom 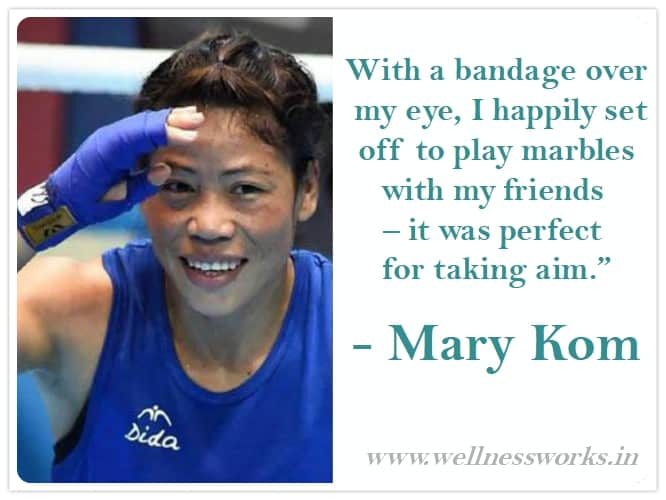 Mary Kom hailed from a humble family with a very limited income. Her parents were rice farmers. Her father was a keen wrestler when he was young. Interestingly, when Kom was in her Grade VI of school, she developed her interest in athletics starting with javelin and 400 meters running.

Her life took a turn when a fellow from Manipur Dingko Singh returned from Bangkok Asian games 1998 with a gold medal. However, along with many others, she too got inspired to switch from Athletes and to take up boxing as a sport in 2000.

At the young age of 15, she left her hometown to study at Sports Academy in the state capital Imphal.

You will be surprised to know her father was against her pursuing boxing as a career and she kept it a secret from him. Because her father feared that boxing would hurt Mary Kom’s face and leave her unfit for marriage. He only got to know about her boxing career when he happened to see her picture in a newspaper when she won the state boxing championship in 2000. It was only after three years of this incident that her father started supporting Kom’s boxing career and got convinced of her career choice.

Mary Kom is married to the footballer Karung Onkholer (Onler). But, she continued to pursue boxing after a short break when she gave birth to her twin boys in 2007. She gave birth to another son in 2013.

Mary is unstoppable as she continues to win medals even today

Why is Crying so Good for the Mind and Soul

How to Overcome Addiction by treating Instant Gratification on your own

Motivational Quotes I – by Denzil Oconnell

Drinking White Tea or Green Tea is certainly not a fad! It has benefits and healing properties often underplayed. It is also one of the