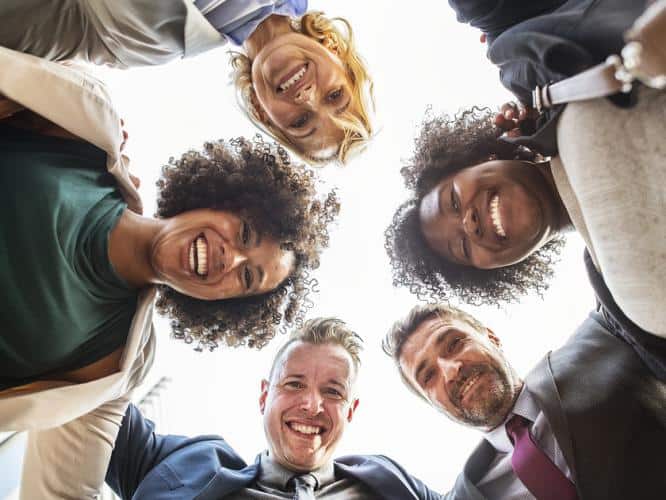 You must have seen people mimicking body language, copying words and talking in the same manner as the others do. Same happens with laughter. Scientific evidence conducted by research and study on participants support the belief “laughter is contagious”.

Why is Laughter Contagious?

“Laugh and the whole world laughs with you”

New studies prove – positive laughter sounds trigger areas in the brain of the listener – as if the brain is preparing facial muscles to actually smile.

Research was conducted  on volunteers exposed to various sounds with brain responses measured with fMRI scanners. The sounds being played were a combination of happy sounds like laughter or victory sounds. However, the other sounds were unpleasant sounds like screaming or nausea sounds.  The brain’s cortical region triggered a response due to various kinds of sounds. The trigger is responsible to prepare the facial muscles to actually smile.  As per observation the response for positive sounds was much higher. Therefore, it suggests positive sounds are far contagious than the negative ones. With the result , scientists can explain why involuntary smiles come up if you observe laughter or cheering or applause.

Dr Sophie Scott, senior research fellow at the Institute of Cognitive Neuroscience said: “We usually encounter positive emotions such as laughter or cheering, in group situations, whether watching comedy programme with family or a football game with friends. This response in the brain, automatically priming us to smile or laugh, provides a way of mirroring the behavior of others, something which helps us interact socially. It could play an important role in building strong bonds between individuals in a group.”

In an incident described in a media release: “Cricket commentator Jonathan Agnew’s description of Ian Botham’s freak dismissal, falling over his own stumps ‘he couldn’t quite get his leg over’ was all it took to send himself and the late Brian Johnston into paroxysms of laughter.”

Laughter and its Scientific Connection with Anti-Social Behavior

In the recent past a clinical study investigated how the brain mechanisms work during genuine and contagious social laughter. The first study (September 28, 2017) was on “Reduced Laughter Contagion in Boys at Risk for Psychopathy.”

Another recent study on contagious laughter by University College London (UCL) validates “human laughter engages brain areas that facilitate social reciprocity and emotional resonance, consistent with its established role in promoting affiliation and social cohesion.” As a result the researchers from UK also found a connection between contagious laughter and anterio insula.

A study was conducted on 62 boys of the age 11 to 16 who showed disruptive behaviors, cold-hearted or unemotional traits. Along with them another group of 30 boys were observed who did not have these behavior traits and were prone to laughter.  The researchers from UCL observed the brain activities of the 62+30 boys by making each boy listen to three kinds of sounds:

The boys rated answers on two questions on a scale of one to seven:

“How much does hearing the sound make you feel like joining in and/or feeling the emotion?”

“How much does the sound reflect a genuinely felt emotion?”

Contagious laughter does not register to the same degree in different children. But this does not mean that the boys who respond less will necessarily become anti-social. The researchers conclude that their findings will help prevent the risk of psychopathy – by understanding it at an earlier stage with more effective treatments.

There are four theories on laughter triggers:

1. laughter triggers by a feeling of superiority
2. a response to appreciate something  unexpected
3. it triggers to release nervous energy
4. it is a means for social bonding to change others behavior

Therefore, a study made subjects view comedy clips before they underwent PET scan. So that the social laughter could be tracked – each subject watched the clips along with two very close friends. Moreover, same subjects saw comedy clips for same amount of time (30 minutes) but alone in the room. 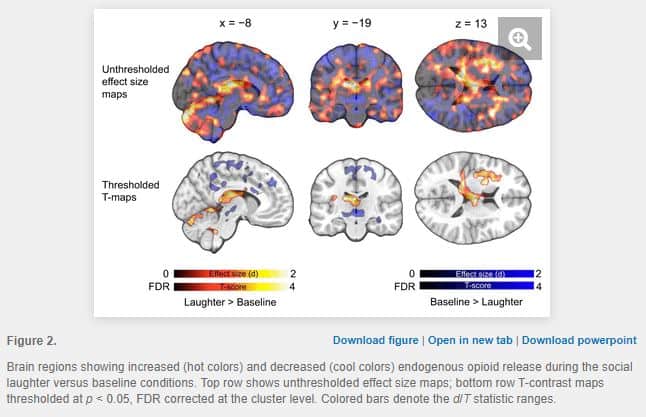 “Social laughter triggers endogenous opioid release, which could provide a powerful way for modulating social bonds in groups. As a result it suggests – Opioid system plays a key role in pro-social communication and soical bodning.”

A recent study also showed that when brain is stimulated at a deeper level it evokes mirthful smiling and laughter in patients with treatment-resistant obsessive-compulsive disorder.

It can be concluded to state – laughter is a neurochemical mechanism to reinforce social bonds and laughter is contagious. Moreover, the number of regions where opioid is released exceeds in those who are particularly involved in social laughter.

Laughter and Jokes – the scientific connect

A team of researchers from University of Southern California (USC) in Los Angeles led by a doctoral student Oro Amir and Irving Biederman a professor of psychology and computer science conducted a unique research recently.

It was to look at brains of professional comedians and comparing them with brains of humans with less humor.

In the past there have been studies on brain while human beings playing music, drew pictures, wrote poetry, however tracing brain activity during humor is an unique area of understanding creativity. It is relatively easier to assess humor because it can be defined if It makes the participant laugh or not.

A study on amateur and professional comedians and non-comedians was conducted by Amir and Biederman. Here, all the three kinds of volunteers were shown a cartoon without texts taken from New Yorker. Each was to come up with captions in two versions – one funny and the other mundane.

Brains of all three volunteers were scanned using FMRI. In addition, a panel analysed each caption to assess its humor level. It was observed that two sections of the brain were more busy while creating funny captions:

this part of the brain is involved in identifying and recognizing complex stimuli.

It is interesting to note the activation of these two regions was different to people with different expertise in comedy. Temporal lobe is responsible to receive sensory information and understands speech and imagery. It is this lobe where the “abstract information converges with remote associations.”

As per Amir:  ” What we found is that the more experienced someone is at doing comedy, the more activation we saw in the temporal lobe.”

In contrast, amateurs or non-comedians brains saw less activity in the temporal lobe region. However, saw much more activity in the pre-frontal cortex. It is the area dealing with complex decision making and planning.

Therefore, Amir and Biederman found the highest funniest ratings belonged to brains with more activity in the temporal regions. So, the more experience you have in doing comedy, the more you can rely on your spontaneous associations.

In additional to giving us a feeling of well-being laughter also boosts physical health by decreasing stress hormones and increasing the immune cells important to fight illnesses. Laughter Yoga – an exercise where students laugh with other group members acting silly reduces blood pressure and stress and improves overall health.

So what are you waiting for – take out time to tickle those funny bones by recalling funny memories over a cup of coffee.

Time for some full-hearted belly laughs!

On a Happy High – Power of Giving

Is Laughter Infectious or Contagious

How to do Laughter Yoga and its Benefits

Why is Laughter Contagious?

The Neuroscience of Humor Investigated

The Neuroscience of Contagious Laughter

Menu
PrevPreviousWhat are the Advantages of Social Media for Students?
Next7 Ways to Overcome Unemployment and Job Loss EffectivelyNext