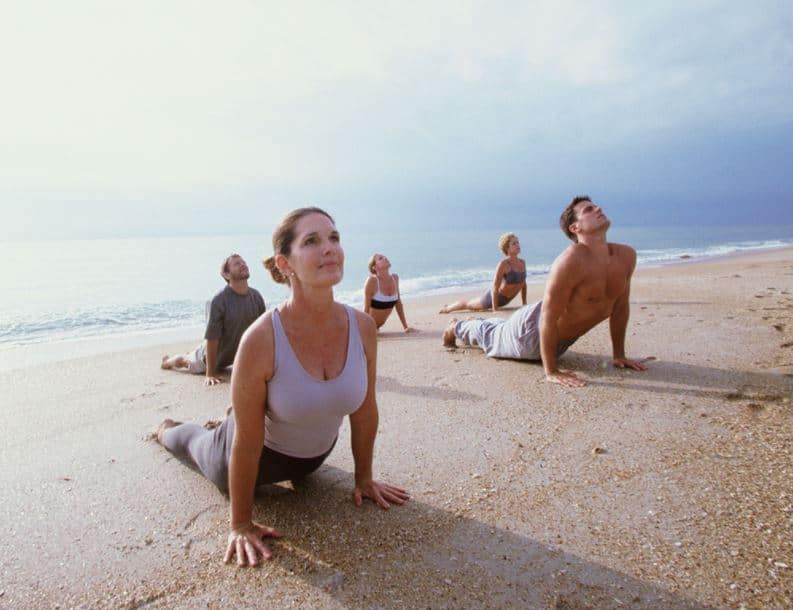 Surya Namaskar or Sun Salutation is the king of Yoga poses.  The ancient yogis taught that the different parts of the body are governed by different devas or divine impulses of light the best yoga exercise or pose to energise these impulses.

The masters of the ancient forms of yoga kundalini yoga and Hatha both propounded that the Surya Namaskar is the complete body workout.

Doing 12 sets of the Sun Salutation in a span of 15 minutes translates into doing 288 powerful yoga asanas.

10 Money Affirmations to turn you into a Money Magnet

Yoga and the attitude of gratitude

Besides good health, Surya Namaskar also provides an opportunity to express gratitude to the sun for sustaining life on this planet.

I. Surya Namaskar and Mental Stimulation

Also, there is a  Surya Namaskar solar plexus connect. The main reason why the ancient Rishis (Sages) recommended the practice Sun Salutation because the regular practice of this technique enhances the solar plexus. It also increases one’s creativity and intuitive abilities.

The regular practice of Surya Namaskar improves blood circulation, maintains health and prevents you from the disease.  The yoga routine has numerous health benefits for the liver, heart, stomach, intestine, chest, throat, legs and almost every other part of the body.

III. Surya Namaskar is good for the ‘heart’

It is for this reason that Sun Salutation is officially crowned as the king of yoga asanas.

An article in the International Journal of Pharmacological Research refers to experiments by the Department of Neurobiology Care Sciences and Society, Karolinska Institutet, Huddinge, Sweden;  states that due to the active process of inhalation and exhalation during the pose, the lungs are ventilated and the oxygen levels in the blood increase.

Thus the exercise is a great way of detoxing by getting rid of excess carbon dioxide.

The Journal of Bodywork and Movement Therapies sites an experiment on healthy Asian Indian men and women 18–22 years who had trained in Surya Namaskar for over two years states that various poses help to improve memory and the nervous system.

The report also states that the exercise routine also stabilizes the activity of the endocrine and thyroid glands, thereby reducing anxiety and inducing calmness.

A 2010 study published in the Journal of Physical Education & Sport concluded that sun salutation or Surya Namaskar is an excellent way to improve the muscular endurance of the muscles of the stomach.

The forward bend posture helps in increasing the abdominal space thereby releasing the gases trapped in the body.

Regular stretching and compressing of stomach region tones up the digestive tract getting you rid of constipation.

How to choose the yoga style right for me

For those suffering from diabetes, this is a Godsend pose. The different stages of vigorous bends and stretches increase the supply of blood in the body, thus bringing down blood sugar levels.

Surya Namaskar requires intense stretching of joints and muscles in the body. This means loosening and toning of muscles.

The different postures ensure symmetry of the limbs while improving the flexibility of the body.

A 2010 study published in the Journal of Physical Education & Sport concludes that Surya Namaskar improves muscular endurance and flexibility.

How to perform the Surya Namaskar yoga asana or pose

The best time to practice the Sun Salutation is early in the morning when the sun is rising. The best way is to perform it facing the sun. While doing so, make sure your stomach and bowels are empty.

Also, it is important to perform the exercise regimen as slow as possible for best results.

Breathing is at the base for the first step of the Surya Namaskar yoga practice. if you get the rhythm correct in the beginning you will keep up that rhythm during the entire set of this the king of yoga poses.

To achieve better results push the pelvis forward a little bit.  This will make the arch a little deeper and also help in the breathing for this step.

If it is a little tough at first to keep your legs straight while placing your palms flat on the ground you may bend your knees a bit to achieve this posture of Surya Namaskar.

For best results of Sun Salutation, make sure that the left foot is in between the palms pressed on the floor.

In many schools of yoga, this step is also completed by keeping the body in straight line legs stretched out as far back as possible like a straight plank.

It is necessary for the efficacy of this step that eight parts of your body are touching the floor at the end of the step.

To get this step right as you inhale, push the chest forward and as you exhale,  push the navel down to the floor. Always remember to tuck the toes under.

For best results in this position,  push the hips down towards the floor, to deepen the stretch and breathe in as deep as possible.

if you are bending your knees gently straighten the knees as you achieve balance and try and touch your nose to the knees.

make sure that your biceps are as close to your ears as possible. The idea is to stretch up and backwards as much as possible.

With this, you have completed one set of the Sun Salutation pose. To repeat all you need to do is change the foot you are pulling back and bending at the knee in steps 4 and 9.

begin today and for the next 10 days, start your day with 12 rounds of Sun Salutation, followed by other yoga poses and you will find that you have an energy filled day that is a breeze both physically and mentally.